Do you have trouble focusing at work? Do you feel like your brain just isn’t as sharp as it used to be? You may be surprised to learn that there is a link between belly fat and impaired brain function.

What’s the association between belly fat and brain function?

Recent studies have shown a strong link between visceral fat and impaired brain function. But don’t worry – there are things you can do to reduce your belly fat and improve your brain health. Keep reading for tips on how to get started.

Body fat is often seen as a cosmetic issue, but it can also have serious implications for our health. Inflammation caused by excess body fat is a leading contributing factor to many degenerative diseases. Current research and a 2019 study found a connection between belly fat and cognitive decline, suggesting that reducing belly fat may help to improve brain function and clarity.

The study found that people with large bellies had worse cognitive decline than those without. The researchers looked at 10,000 men and women who were scanned for brain MRI before participating in this research experiment to measure their body mass index (BMI), waist-to-hip ratio as well as markers of inflammation called CRP or sushi scale which is used widely around Asia.

The result: participants whose measurements fell within high ranges suffered slower mental abilities such an attention span while those maintaining low values appeared not to have any effect on cognition whatsoever.

Also, study findings also showed that as the waistline increases, so does cognitive decline. The researchers discovered an interesting biomarker of Alzheimer’s disease: where people had significant amounts of central obesity or fatty tissue around their midsection region-in other words not just on arms/legs but also inside the stomach area -there were greater losses in gray matter volume compared to what would be expected based off someone’s height & weight alone; meaning location matters too!

The findings suggest that targeting obesity could be a potential strategy for mitigating cognitive decline in older adults.

Though more research is needed, the results of this study provide valuable insights into the relationship between body fat and brain health. Reducing obesity may help to improve cognitive function and prevent or delay the onset of degenerative diseases.

It’s all in the hips: Waist to Hip Ratio Vs. BMI

While Body Mass Index (BMI) is a common measurement for determining whether someone is a healthy weight, it doesn’t take into account where that person’s fat is distributed on their body. Waist-to-hip ratio (WHR) is a better measurement of healthy body fat distribution. Importantly, both BMI and waist-to-hip ratio are useful tools used to manage fat loss.

Why is Waist to Hip Ratio a better measurement than BMI?

BMI doesn’t take into account where on your body you carry your weight. Someone with a high BMI could be carrying their weight in their muscles, which is much healthier than carrying it in their abdomen.

Carrying weight in your abdomen, particularly around your internal organs, is associated with a higher risk of type 2 diabetes, heart conditions, and stroke.

So, if you’re trying to determine whether you need to lose weight, or how to best target your weight loss efforts, WHR is a better measurement to use than BMI.

The connection between body fat and inflammation.

Researchers explain the connection between visceral fat, inflammation, and the impact on the brain.

“Visceral fat is thought to be a major site for inflammatory cytokine production and has been linked to other vascular risk factors (hypertension, diabetes mellitus) that may be important mechanisms in brain atrophy. Associations between obesity and gray matter volume were only partly explained by diabetes mellitus in the present study. In contrast, subcutaneous fat in the hips and legs has been linked to healthier metabolic profiles, which may provide partial support for the concept of metabolically healthy obesity. Indeed, our data suggested that obese participants (BMI ≥30 kg/m2 ) without central obesity had a gray matter volume similar to that of overweight participants.”

Body fat is a marvelous organ. It helps regulate our metabolism. In the context of chronic conditions, though, body fat is a powerful source of inflammatory chemicals. Fat cells produce chemical signals that cause inflammation.

The bottom line is that excess body fat is a major health concern. Not only can it lead to a multitude of chronic diseases, but it can also impact brain health. If you are carrying extra weight, especially around your midsection, it is important to take steps to reduce your risk of cognitive decline.

Cognitive function refers to the ability of the brain to process information and perform tasks. This includes functions such as memory, concentration, and decision-making.

Cognitive function can decline with age, and this is a normal part of the aging process. However, cognitive decline can also be caused by conditions such as dementia, Parkinson’s disease, and stroke.

Obesity is a risk factor for many chronic diseases, including those that impact cognitive function. This is because obesity increases inflammation throughout the body, and inflammation has been linked to cognitive decline.

In one study, overweight adults were found to have lower scores on tests of cognitive function than adults of normal weight. The difference in scores was most pronounced in tests of executive function, which includes tasks such as planning, organizing, and multitasking.

Another study found that obese adults were more likely to experience declines in cognitive function over time than adults of normal weight. This study also found that the longer someone was obese, the greater their risk of cognitive decline.

These studies suggest that obesity may have a negative impact on brain health and cognitive function. This is yet another reason to take steps to maintain a healthy weight.

How to Reduce Belly Fat

Some DIY tips for reducing obesity include:

-Eating a healthy diet that is low in processed foods, sugar, and saturated fat

Making even small changes in these areas can have a big impact on your health. So if you are concerned about belly fat and brain function, make a plan to start reducing abdominal obesity today.

Recently, there have been a number of new non-surgical options for reducing belly fat. These include:

–Lasers: This includes procedures such as laser lipolysis, which involves using a laser to break down body fat.

–Coolsculpting: This is a procedure that involves freezing fat cells to kill them.

–Injections: This includes procedures such as mesotherapy, which involves injecting fat-dissolving substances into the fat.

These procedures are typically less invasive than surgery and carry a lower risk of complications. They can be an effective option for people who are not candidates for surgery or who do not want to undergo a major procedure.

These procedures are typically done by a qualified physician. If you are considering any of these options, be sure to consult with a doctor to see if they are right for you.

Surgical interventions for obesity are typically only recommended for people who are severely obese and have not been able to lose weight through other means. Surgery is a major procedure and carries with it a number of risk factors, so it should not be undertaken lightly.

There are a number of risks associated with surgical interventions for obesity, including:

-leaks in the digestive system

Before undergoing any type of surgery, it is important to speak with your doctor about the risk factors and benefits. Surgery should only be considered as a last resort after all other options have been exhausted.

If you are considering surgery for obesity, make sure to consult with a qualified surgeon who has experience performing the procedure you are interested in.

At APEX Brain Centers, we administer cold laser treatment as a modality to improve brain function by reducing belly fat. This procedure is called laser lipolysis and it involves using a laser to break down body fat. This is a minimally invasive procedure that carries a lower risk of complications than surgery.

If you are interested in laser treatment for reducing belly fat, please contact us to schedule a consultation. We will be happy to discuss the procedure with you and answer any questions.

Does your brain feel like it's on fire? Brain inflammation causes and treatments. ...
Posted in Academic Performance 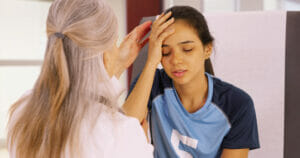 According to a study published in the Journal of the American Medical Association in 2022, concussion was linked ...